Bosch and digital leadership: How doubleYUU is driving digital transformation

Bosch and digital leadership: How doubleYUU is driving digital transformation

Robert Bosch GmbH stands like no other company in Germany for first-class engineering and technological leadership. “Excellence” is the predominant value by which the entire company is guided – regardless of whether the engineers at Bosch work in sectors such as automotive supply, consumer goods manufacturing, or in packaging, industrial, or building technology. The company has 118,800 associates at 80 locations in Germany and around 300,000 associates at nearly 260 locations in 50 countries worldwide.

Robert Bosch GmbH entered an exciting transformation process several years ago. A project team has been assigned the task of exploring the potential offered by the topic of social collaboration in the company, which stands for the art of engineering made in Germany like no other, and what the roadmap for the digital transformation of the traditional company should look like. The goal is to demonstrate excellence in the field of new forms of networked communication and collaboration. While the project group is responsible for defining the setting, i.e. the framework and potentials of the change process, Michael Knuth, as head of Central Organizational Development, is in charge of the further change steps in the driver seat. Also, the topics of change and enabling fall within his area of responsibility.

However, Michael Knuth knows that, as with all change processes, bringing the effects of this transformation process into people’s minds is not easily done at Bosch. In fact, such a development has the potential to change the way we work together, even beyond IT tools, and to teach networked thinking to an entire organization.

Bosch turned to doubleYUU to create the necessary mindset for the upcoming change among divisional managers and executives. In a series of workshops and lectures with Dr Willms Buhse as well as with the help of a methodological profile provided by doubleYUU, they were sensitized to the change processes, social collaboration and digital transformation, especially in thinking and for the approach to problems. “The aim was to show the managers where the journey is headed in terms of self-organized work models,” says Michael Knuth. “What does that mean for you as a manager? How do you lead in a self-organized system?”

One of doubleYUU’s success patterns is to analyze best practices of drivers in the field of digital transformation and to transfer the success patterns from the Internet world to the world of traditional companies – an approach that Michael Knuth found very helpful in this case of Bosch. “It makes sense for us to orientate ourselves to a certain extent to Internet innovators when feeling our way into this new world, rather than, for example, to a direct competitor from our industry is in the field of digital transformation. Of course, you then have to answer the question of what a success pattern of companies like Netflix can mean for everyday life at Bosch. But Dr Willms Buhse manages to do just that. He helps to build a bridge between the patterns of Internet innovators and the day-to-day management of our managers. 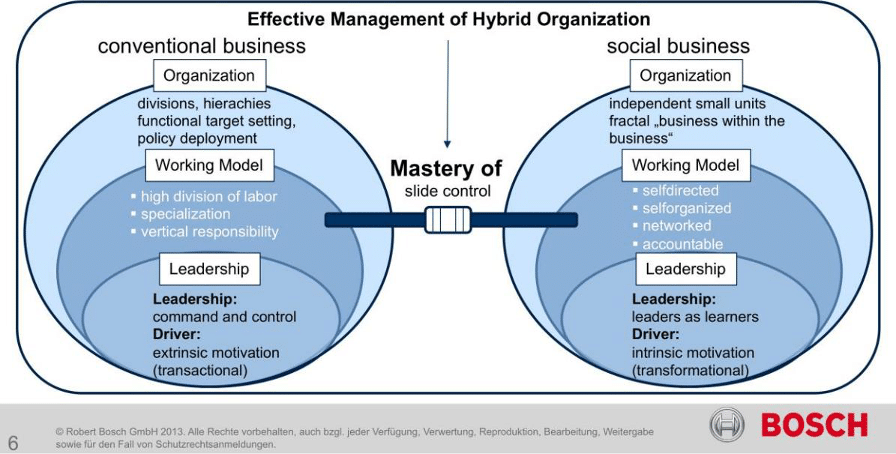 Bosch relies on a kind of slider system for its digital transformation: The company wants to learn in which cases it makes sense to make use of more classic value and decision-making patterns such as high specialization, functional excellence and hierarchical organization, and when switching to the self-organized patterns of the networked world will help. “For good reasons, we use patterns that tend to be found on the left side of the slider, for example in the production areas. For the focus there is not so much on the ability to adapt quickly, but rather on efficiency and excellence,” says Michael Knuth. In other areas, by contrast, Bosch is interested in using networking know-how to realize potential – for example, to develop innovations with the help of the crowd or to solve problems faster than before with the help of networked experts.

The aim of workshops was to demonstrate in a practical manner the potential offered by a networked approach and how it can be used in everyday management tasks. “We present managers with a range of methods that are relevant to their everyday work,” says Dr Willms Buhse. “Very tangible things, according to the motto: You can do that starting tomorrow.” One example of this was, for example, tips on how to use stand-up meetings and innovative event formats to stimulate employees’ desire for self-organisation. “It’s all about approaches where managers can immediately try out how far these methods can help in real processes and with real problems,” says Michael Knuth. At the same time, all managers received a method profile developed by doubleYUU. It documents which tools and procedures from the networking world are useful for which typical tasks of an executive. “In this way we have provided the participants with very practical assistance, according to the motto: You can do it differently tomorrow”, says Michael Knuth.

It was precisely this that ensured that the workshops met with positive feedback and made a valuable contribution to Bosch’s digital transformation. “You can discuss a lot about models and visions,” says Michael Knuth. “But people usually ask: ‘What should I do concretely, what can I do differently? This approach answers this question to a certain extent, leading managers and teams to self-organized working models. We didn’t talk about IT at all, and we got feedback that people were very grateful for that. This success pattern is now being transferred to other Bosch divisions and business units. The initial events have already resulted in a number of additional orders for workshops and seminars.

Michael Knuth concludes: “Dr Willms Buhse is highly inspiring and motivating in his way. He brings in a very valuable outside view and has authority in bringing in this outside view due to his CV and his own experience. He doesn’t talk about things he has read, but can draw on first-hand examples from his CV and experience.”

We are the leading management consultancy for large corporations and ambitious medium-sized companies. We lead you and your company into a successful digital future.