The majority of executives still leads the old-fashioned way

As part of our blog series about the digitalization of the working world and its consequences for businesses we now focus on the key part of digital transformation: leadership. Leadership – or management – has two levels of meaning: on the one hand it’s about guiding the employees, on the […]

The majority of executives still leads the old-fashioned way

As part of our blog series about the digitalization of the working world and its consequences for businesses we now focus on the key part of digital transformation: leadership. Leadership – or management – has two levels of meaning: on the one hand it’s about guiding the employees, on the other hand it’s about leading the company. In this particular article I refer to both which means, managing the company in the digital age in a way that employees can develop and stay loyal. By the way: we are already in the middle of it! According to a current research study from BITKOM the digitalization of 52 percent of the companies furthers the transparency of internal decision-making processes. “In about three quarters of the companies the digitalization speeds up the external communication with customers or the internal communication among the own employees.“ Already 75 percent of all companies agree that digitalization calls for a new corporate culture.

Digital Leadership? No chance!
The majority of executives still leads the old-fashioned way 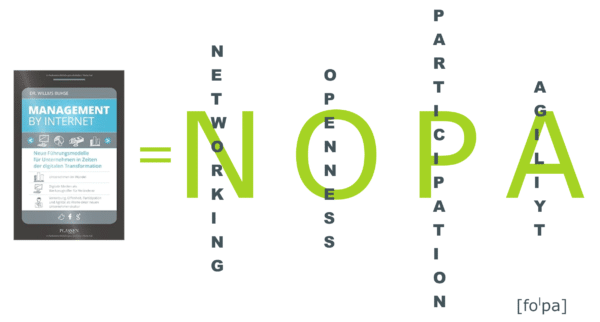 This management style is not practiced in most of the companies in Germany – as a research study of the consulting company Intersearch confirms. People assume that internal communication in German medium-sized businesses takes place faster and more networked, but managers haven’t reacted to this yet. This can lead to disastrous consequences. Companies will lose employees on the short- or long-term and processes cannot be adjusted to the customer’s needs. So it’s about time to review existing management styles and supplement them with new ones.

But how does it work? 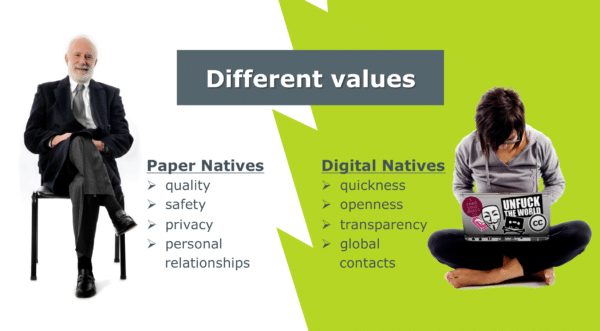 After all, traditional values like excellence, efficiency and safety have contributed to the success of many German companies, making them stand out from the world market. Against this background many leaders are proud – and justifiably so. The internet has different success factors: networking, openness, participation and agility (the so called NOPA principles).

The trick is to combine the best of both worlds. Traditional organizations have to learn how to use the new tools and how to assimilate hierarchical structures with the networked leadership patterns of Management by Internet according to the situation. In this case managers’ lack of understanding for the digitalized culture calls for action. Let’s take a closer look. Networking, openness, participation and agility in companies could look like this:

The term Internet itself already contains the word network. In this particular context it means computers that are linked to each other. Applied to organizations networking means that all the members of the organization are connected through a network of relations in order to get information and to help as well as to solve crises. Thus, networking as a management style is the opposite of hierarchy. In a networked organization everybody can contact everyone to get or pass the information that is actually demanded. For this you’ll need technology, in particular collaboration platforms like Connections and SharePoint or social networks like Yammer. But above all, managers have to have the right mindset. Whoever thinks that communication becomes efficient through hierarchies doesn’t have the right mindset for networked management.

A term that is close to “curiosity“ and this is exactly what it’s about. Are leaders open minded enough to allow experiments with unpredictable results? Or to take them into account? This is how Netflix, a very successful company from the Silicon Valley, operates: through the principle of “rapid recovery“. Only in case of business-critical processes it’s about avoiding mistakes. Otherwise the focus lies on the question, when and how fast mistakes get fixed. If you’re a manager, you should ask yourself critically: How open minded are you in fact for new ideas, if they could possibly endanger the reputation of your department? And: To what extent do you let your team work on its own responsibility? Because without the possibility to work by trial and error modern leadership won’t work. Rigid hierarchies, bureaucracy and a strong need for control are obstructive. Speaking of personal responsibility:

“Participation is the new added value“, said Thomas Sattelberger, one of the big thought leaders in the modern working world and former director of the German Telecom, in a publication from the “Wirtschaftswoche”, a German weekly business news magazine. This is a condition that “digital natives“ demand from companies anyways. But participation in companies will only happen, if managers actively support it – for example by replacing long-lasting meetings with quick stand-up-meetings or replacing complicated decision-making processes in working groups with a FedExDay where different employees come together for 24 hours to work and solve an issue in collaboration. BarCamps and OpenSpaces are further methods to let the ones participate in the decision-making process that are actually involved. A manager who likes himself talking the most and doesn’t believe in the wisdom of crows often has difficulties understanding and practicing participation.

If you want to incorporate this fourth principle into your management style you have to be flexible. And your business plan has to be as well. Often this is difficult because companies and managers are supposed to be predictably – especially in Germany. But in most cases this is just an apparent objection. The truth is that agility isn’t all about lacking predictability but rather about timing. The period in which goals and decisions are controlled and adjusted is shorter in agile management.

The Internet is one thing in particular: fast. The same applies to its products and their life cycles. Get employees on board that can keep up with this pace and bind them to your company! Learn to be a “Digital Leader“ so that you won’t lose your most important resource: your employees.

By the way: For more than five years doubleYUU has been offering speeches, seminars, coaching and workshops. The program of our Digital Leadership Academy has never been more attractive! Companies like Axel Springer, BoschDaimler, DHL, Lufthansa, Orsay, Otto,Microsoft Vaillant and many more do already benefit from our expertise to make their organizations ready for the digitalized working world.

Take a look at our topics: Digital Leadership Academy.

And in case you do not know yet where you might have skills gaps: Herefore we offer a tool: Digital Knowledge Analysis.

If you are interested, Anja Hahn will send you our program or prepare a customized offering for you and your business.

Any cookies that may not be particularly necessary for the website to function and is used specifically to collect user personal data via analytics, ads, other embedded contents are termed as non-necessary cookies. It is mandatory to procure user consent prior to running these cookies on your website.